I was fretting, in spring, about whether the eastern bluebirds would adopt our new birdhouse. The birds landed on the wooden box once or twice and peered into the hole, but they didn't seem to be building there. I told myself it was OK if the bluebirds found a better nesting cavity in the woods, but I longed for them to move into the birdhouse, where I could see from the kitchen and the front door.

Then I heard that mealworms, which are usually sold as food for pet reptiles, would help persuade bluebirds to stay. Two days later, mealworms arrived by UPS, in a small, screen-sided cardboard box.

The mealworms were loose in there, most of them bunched up around the piece of raw potato included for food and moisture, with instructions to provide them with oatmeal or wheat bran as bedding. The weather was cold and drizzly. I hadn't seen any bluebirds all day. I picked a dozen of the inch-long mealworms out of the box and carried them by hand to the birdhouse. They were dry and smooth, and although they tickled a bit when they wiggled, they weren't at all nasty to hold. 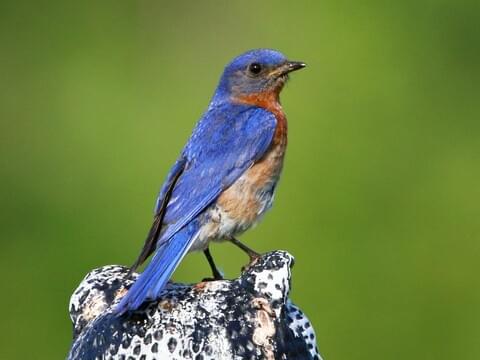 Whistling my poor imitation of a bluebird's song, I put the mealworms on top of the birdhouse and retreated to my kitchen. An hour later I noticed a female bluebird standing on the birdhouse roof. She cocked her head to study the pale yellow mealworms, and then she picked one up in her bill and swallowed it.

After she'd consumed several, her mate flew in from the nearby trees, landed beside her, and ate some too. I'd read that it might not be good for bluebirds to give them too many mealworms, so I restrained myself until evening to put out another supply. The female caught on fast. As soon as I opened the door and did my fake bluebird whistle, she came down from a treetop to a branch near the birdhouse, and she landed on it before I got back to my house.

My husband, Michael, is not enthusiastic about things that wriggle in the kitchen, but he adapted with surprising speed. When he looked in the refrigerator for snacks, he discovered an open bin of oatmeal and mealworms.

He stirred the contents with a finger, looking at the larvae of darkling beetles. They can't crawl up the sides of the bin, and besides, they don't move much when they're cold. I took good care of my mealworms, except for contributing a few of them every day to the bluebirds. On alternate weekends I brought their bin out of the fridge for a day and a night so they could warm up and feed. I put a fresh slice of apple or potato in their bin, and they consumed everything but the peel. You may interest someone else in bluebird conservation!

New boxes and trails should be established and older boxes cleaned and repaired prior to the start of the bluebird nesting season.

Ideally, boxes should be available by mid-March in Connecticut. However, since bluebirds have more than one brood a year, boxes may be put up at any time of the year. The success rate for box use drops as the nesting season progresses. Learn to recognize the nest and eggs of the house sparrow and remove them from your nest box.


House sparrow nests, eggs, adults, and young are not protected by law and may be legally removed or destroyed. It may take many weeks of removal to discourage house sparrows from using your bluebird box. A house sparrow nest is very sloppy. It is made of coarse grass, rootlets, leaves, straw, and possibly bits of cloth and litter, which fill the cavity.

It often has a domed roof when built in a nest box and may vary in size. The three to seven eggs are oval and white, gray or greenish, with irregular, brown speckles. Black-capped chickadee or tufted titmouse: a downy nest of mosses, fur, and soft plant fibers. House wren: a messy nest of twigs, occasionally lined with finer fibers.

House sparrow: a nest with a jumble of odds and ends, such as grasses, cloth, feathers, twigs, and possibly bits of litter. Plant native trees, shrubs, and vines that will provide fall and winter food for bluebirds. The following are some bluebird favorites:. Use "paired boxes" if nesting bluebirds are harassed or driven off by tree swallows.

Quickly set up a second box 20 to 30 feet from the first. A tree swallow pair will select one box for nesting and defend the other box against use by other swallows, allowing the bluebirds to claim it. This strategy makes it possible to encourage the successful nesting of both the bluebirds and the equally beneficial tree swallows.

The nest box illustrated to the right was designed by the Connecticut Bluebird Working Group. More skill is required for constructing this box, but it is easier to mount. This nest box has an entry-hole predator guard and opens on the side for easy monitoring and cleaning. Plans for a simple, yet effective, nest box are illustrated on below. The box is designed not only to meet bluebird needs, but to be durable and easy to clean and repair. It is easily constructed with hand tools and a minimum of materials. Nest boxes can be made out of almost any wood, but cedar, pine, or cypress are preferred.

Do not use pressure-treated lumber or exterior plywood, both of which are chemically treated and unsuitable for nest boxes. If rough-cut wood is not used, score or groove the interior surface of the front, below the entry hole, to aid nestlings in climbing out of the box. Both nest box styles should be assembled using dry wall screws, which make repairs to the box easier. Use of Phillips-head screws helps deter curious passersby from opening the nest box.

If weatherproofing of the nest box is desired, the outside surface can be treated with linseed oil.

Allow the oil to be totally absorbed before installing the box. It is best not to stain or paint nest boxes. However, a light-colored stain or latex paint may be applied to the outside of the nest box. Avoid using dark colors and never stain or paint the inside of the box or entrance hole. Nest boxes should be mounted five feet above ground level on galvanized pipe or six- to seven-foot metal garden stakes. Flatten the tabs on the stakes to discourage raccoons.

Boxes can be attached to metal stakes with carriage bolts or to galvanized pipe with screws or pipe brackets.

Boxes should not be mounted on trees. Pole-mounted nest boxes are still subject to predation. Predation rates vary dramatically from location to location and year to year.

Three types of predator guards are shown on page 3. Most experienced "bluebirders" have a favorite style; however, no single design is favored unanimously. All do agree that an additional predator guard is very important and, in some areas, essential to successfully raising bluebirds. Maintaining a log or journal on your nest boxes helps document box success or failure for end-of-season surveys.

A journal provides information on when eggs are expected to hatch, when young are likely to make their first flights, and why a problem may have developed with the nestlings.

Keep records in a way that makes sense to you and is easy to complete. Some suggestions:. Determining the age of young bluebirds is extremely difficult. The size, weight, and development of nestling birds vary greatly and are dependent on food, weather, temperature, and the number of birds in a nest.

Despite these variations, some common clues can help you approximate the age of nestling bluebirds. 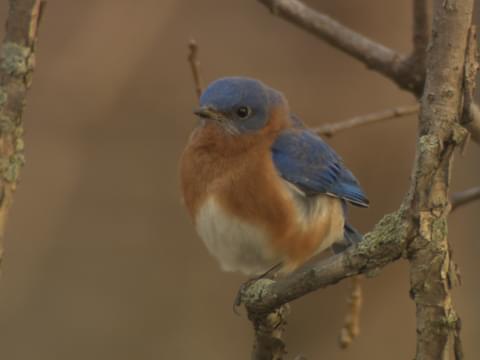 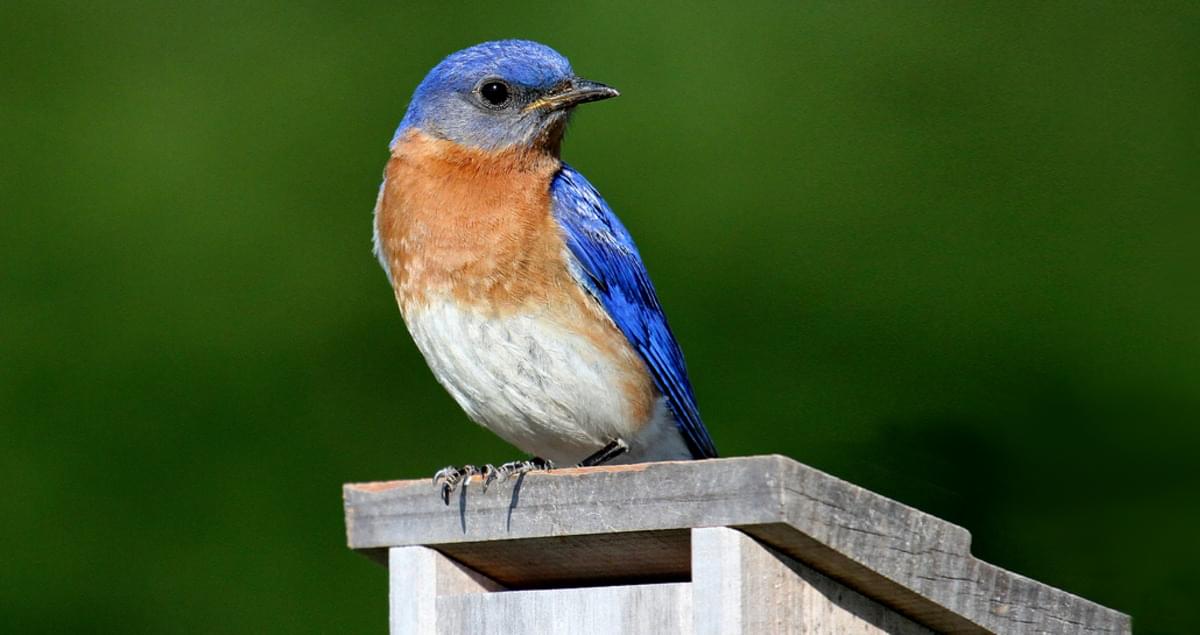 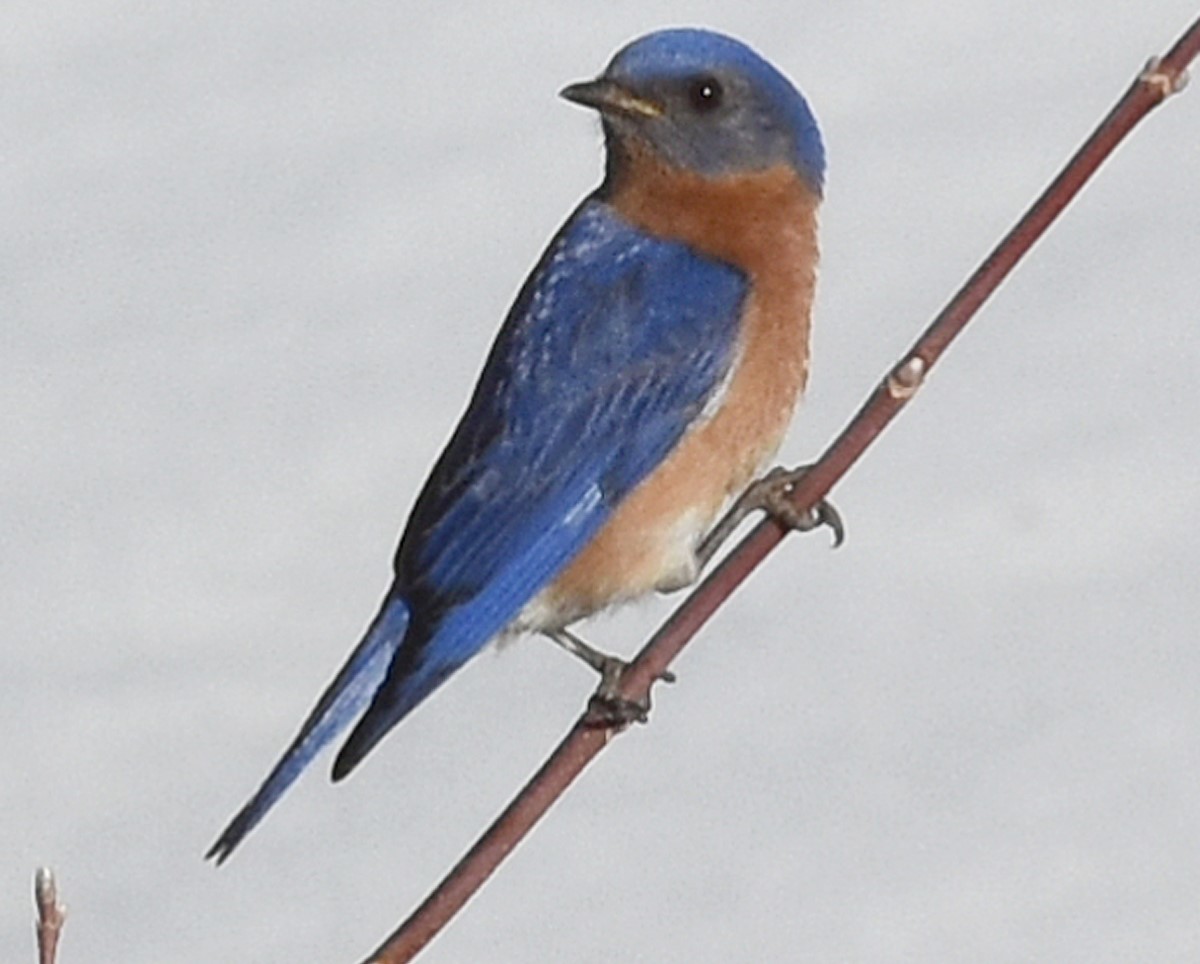 Related In a Bluebirds Eye